Gillette, Is This The Best an Ad Can Get? 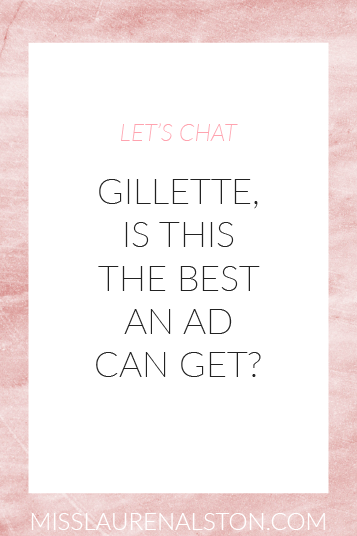 Happy Wednesday! I'm extremely excited about this post as it's been heavily discussed in both my personal and academic circles. Today, I'm diving into Gillette's latest ad/'short film' that critiques toxic masculinity in the 21st century.


If you haven't seen the video, it's linked here and I highly recommend you watch it before you continue reading. My main take away from the video is that men should commit to fighting toxic masculinity by defending women, calling out their peers when they're in the wrong, and discouraging violent behavior in order to set a positive influence on younger generations of boys. When I first saw the ad, I immediately loved it wanted to support Gillette {see this tweet}. It wasn't until I got on Twitter and saw the criticism and responses to the criticism that I realized how controversial the ad was. Not even a day later, we talked about the ad in my marketing class and the responses surprised me. I ended last week with a lot of thoughts that I wanted to share and this is literally the reason I started this series. To organize my thoughts a little bit, I'm going to respond to the 3 biggest criticisms that I saw and/or heard; so, let's chat.

Whenever I see or hear this criticism, I want to laugh because at the end of the day, Gillette is a brand that wants to sell products and they never claimed otherwise. There is a way to promote a positive message and/or initiative while also promoting your brand. Some great examples of this are Dove's Real Beauty campaign, Patagonia's Protect Public Lands ad, and Nike's Colin Kaepernick ad. These are all fantastic examples of brands standing up for what they believe in and even though they faced their own criticisms, they weren't criticized for pulling a stunt for attention or to sell products. Further, there is no razor or other Gillette product present in the ad at all. I find it difficult to see how Gillette is pushing their product when their product isn't mentioned or showed once. I fully agree that this ad was meant to be attention-grabbing and to increase Gillette's brand equity, but I genuinely think it was created with good intentions and to create a conversation about what men can do to be better.

2) Gillette are hypocrites/part of the problem

In one of the discussions I've had about the ad, one of the points made is that Gillette has a history of using stereotypes about sexuality and masculinity/feminity in their ads which makes this ad seem less sincere and a bit out of left field. Similarly, in response to my point about Patagonia and Nike, it has been said that those companies have more of a platform to speak out on those issues because they either have a history of doing so or it is better aligned with their products. First of all, there is no time like the present to speak out. We should be applauding Gillette for making the choice to use their voices instead of criticizing them for joining the conversation, as well as for recognizing their past mistakes and making an effort to be better. I agree that it may have been more impactful had they criticized some of their own past ads; it would have been more relatable and less holier-than-thou. Finally, I actually think that this issue perfectly aligns with Gillette's brand. They are a men's personal care brand and more so, shaving is a practice that marks the transition from boyhood to manhood. I see a beautiful parallel to young boys looking up to their dad's shaving and their dads teaching them how to shave to men looking up to the way their dad's treatment of others and dads teaching their sons how to be good, respectful men. To sum up this response, my dad has always said "if you're not part of the solution, you're part of the problem", and I think this ad is a great way for Gillette to change their role.

3) Gillette is saying all men are trash/toxic

Finally, I noticed that much of the criticism of this ad comes from men. I definitely see how men could feel attacked and get defensive after viewing the ad, especially as it deals with serious issues and allegations that have occurred over the past year. However, I think the point of the ad is, as Terry Crews says, "men need to hold other men accountable". Maybe you've never done a single predatory thing in your life, but have your friends? And if they have, have you said anything to them about it? Being good isn't just about not being bad, but calling out bad when you see it and you're in a position to do so. Further, the question "is this the best a man can get?" is about constantly improving, because there is always room for improvement. As Gillette says, "It's only by challenging ourselves to do more, that we can get closer to our best."

Obviously, I'm a big fan of the ad; but I'm open to hearing differing opinions and having a discussion in the comments. I'd love to hear your thoughts, so please share them! Similarly, share any topics/ideas relating to the beauty industry that you want to hear my opinions on/you think would be good for this series! xx, Lauren