Book + Movie Talk: Before I Fall by Lauren Oliver 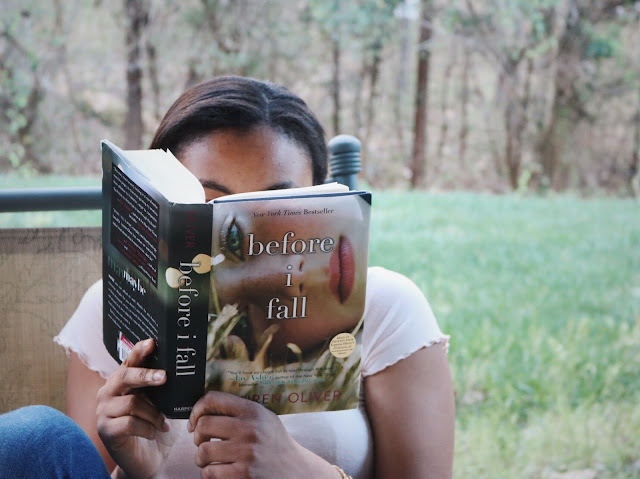 Hello everyone! I'm back today discussing one of my all-time favorite books: Before I Fall. I've been a huge Lauren Oliver fan since middle-school, not only because we share a name, but also because she's an amazing writer and her words have a way of taking me out of reality and making me think. This past weekend, I went to see Before I Fall in theaters with one of my good friends Allie, so I wanted to share my thoughts on the book and movie separately and also comparing the two!
Book:
What makes Before I Fall different from other teen fiction stories is that it highlights the good and bad parts of high school. It's one of the most realistic depictions of high school I've ever read. Without spoilers, the four main character (Samantha, Lindsey, Elodie, and Ally) are the "popular" girls in their high school. One of the things that makes Sam, the narrator, notable is that she's super self-aware for a high schooler. She knows that her group of friends aren't the prettiest or the smartest in their school and the product of their popularity is a result of their luck. She knows what it's like to be on the "other side" and is able to appreciate that she spent her 4 years in high school "kissing the cutest boys and going to the best parties" and while all of that seems important in the moment, in 2 or 20 years none of it will matter. There are so many other things I love and relate to, but for the sake of the length of this post, I'll share just one more. On the day that Sam is her most rebellious, she does and says whatever she wants, but it doesn't make her feel any freer. She still feels trapped by herself, she doesn't know who she is, what she wants, or what she needs to do; but she quickly realizes that what she thinks she wants is far off. That is high school.

Movie:
The movie does an incredible job of making the audience feel Sam's frustration. Sam's almost unlikeable in the beginning because she tries too hard for something it doesn't even seem like she wants. She's putting on a facade that for some reason only the audience sees through. Yet, somehow, by the end of the film, you're rooting for her to forget the stereotype and popularity and careless attitude and feel her emotions and act on them. My favorite part about the movie is that despite realizes her friends' flaws and recognizing their callousness she loves them for being there for her and she's not afraid to remark on it. She doesn't need her friends to realize the error of their ways for them to stay her friends. Changing herself is enough and she knows that it's not her job to make them see the way she does.

Book + Movie Comparison:
I'd say hands down the book is better. While there were many parts of the movie I liked and even loved, I had high expectations after the book and the movie did not meet them. I felt like some of my favorite scenes didn't make it into the movie which I understand happens often due to time restraints in the film but it was still a little disappointing. Also, the book was set in 2010, which was only 7 years ago, but 2017 teen culture is very different than 2010 teen culture and some of the dialogue didn't seem to match the circumstances. For example, the use of "bae" in the movie. It was never used in the book because it wasn't a thing back then, but it's used often and incorrectly in the film. Also, there is so much more awareness for bullying and cyberbullying now than there was then, so I find it's unlikely that some of the things that Sam and her friends did would go unnoticed, or that they would not be punished.

If you've read the book and have high expectations I wouldn't recommend the movie. If you enjoyed the book but weren't super invested in it then you would probably enjoy the movie. Lastly, if you saw the movie and liked it than you should definitely read the book because it offers so much more information and insight than the movie. Thanks for reading this super lengthy post, I'll be back in a few days with something lighter and shorter! xoxo, Lauren.
SaveSave