Book + Movie Talk: Me Before You by Jojo Moyes 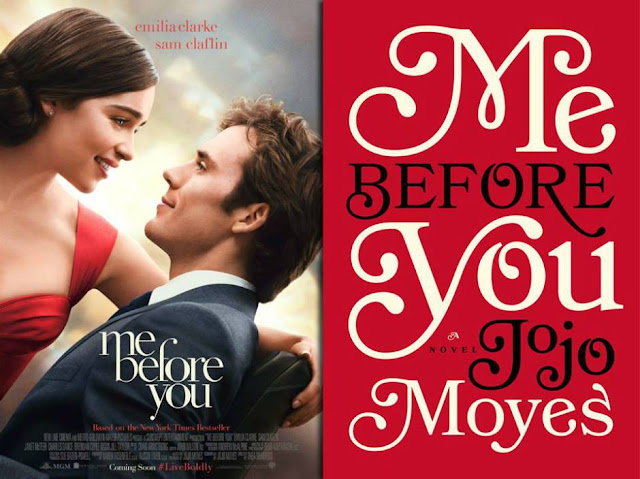 When I read Me Before You over a year ago, I had no idea it was going to be made into a film. Jojo Moyes' novel moved me in unexpected ways and seeing it on the big screen was (almost) everything I wanted from the film.


A short synopsis: Everything about Louisa Clarke's life is pretty boring, except for her sense of style. This quickly changes when she becomes the caretaker of a sarcastic grouch with a bad attitude named Will Traynor. Will's life was turned upside down when he was the victim of a motorcycling accident and lost feeling in his body from the neck down, becoming a quadrapeligic. His life that was once filled with sports, travel, and adventure he feels has become stagnant and lifeless. Slowly but surely, Lou starts to make realize that life is more than his physical limitations; but will it be enough to keep him from ending it all?

* Spoiler Alert*
I've seen tons of controversy surrounding the story. Critics claim that Me Before You displays disability as a fate worse than death and I strongly disagree. I understand how people with disabilities or injuries similar to Will's may, I read the book as Will's story rather than a commentary on disabilities in general. Throughout the story, Will's loved ones are constantly proving to him that there are numerous things he can do instead of focusing on the things that he can't. Will acknowledges that there's a life that exists for him, however it's not the life that he wanted or planned and he doesn't feel that he can accept his new fate. The combination of Will's entitlement, stubborness, and youth are his downfall.

Controversy aside, I was upset and surprised that many of the more serious themes from the book didn't make it into the film. Having experienced sexual assualt as a child played a big role in Louisa's character, not only her history but her present the way she interacts with others. Whether the movie chose not to include this storyline due to time constraints or because they wanted to focus more on Will's story, the film version of Louisa lacks the depth and substance that make her likeable and understandable in the book. Though I enjoyed the balance of her levity with Will's gloom and arrogance, I wish Louisa's character hadn't been portrayed as childish and naive.
*End Spoiler Alert*

I really liked the film, and felt moved by it. It wasn't as emotional as it could have been or as I was expecting, but there were definitely some parts of the film in which my eyesight got a bit blurry if you know what I mean. I recommend watching the film first to see if you like it and if you do, reading the book so you can have a better understanding of what happened between Will and Lou. There are so many aspects of their personal histories, familial relationships, their love story that didn't find there place in the movie but flourished in Me Before You.

I hope you enjoyed this review/comparison of Me Before You. It's been a while since I've done one of these, but I'm so glad that I did because it made me remember how much I love them. Stay tuned, xo Lauren.
SaveSaveSaveSaveSaveSave