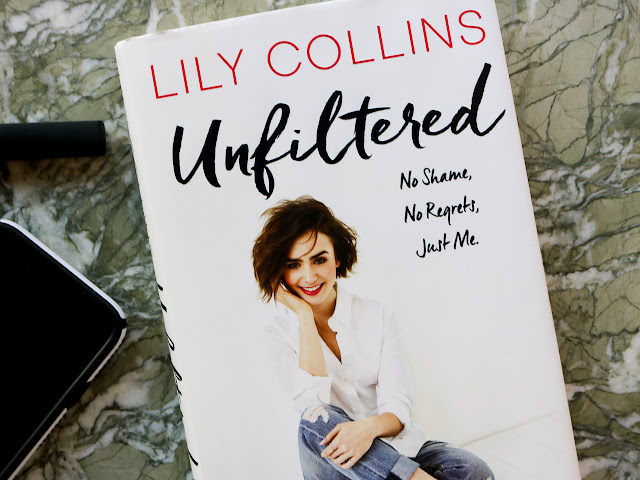 I have been such a huge Lily Collins fan since I first saw her in The Blind Side about 8 years ago! That's kind of crazy to think that I've been a fan of her for almost half of my life! Stuck in Love is one of my favorite movies and I cry every time I see Love, Rosie. I wanted to read the book sooner rather than later, because in her new Netflix film To the Bone her character is struggling with an eating disorder which is something that Lily Collins has had experience with. It was important to me to read her story and gain some perspective before watching the movie, and conveniently one of my best friends, Allie, got me the book for my birthday (she knows me so well)!

Lily Collins' Unfiltered is an easy read that gives you a peek into her life. Though a lot most of her life lessons are super corny, they are delivered in a way that makes them meaningful and allows us to understand what it took for her to learn them. While her disordered eating only takes up a couple of chapters, it emphasizes her strength as she is often dealing with a lot of hard problems at the same time. That part of the story was super significant to me because when something big and bad happens in our lives it affects everything else. It might start with one thing, but slowly and surely everything starts to wither.

As far as To the Bone, I enjoyed the movie. I was super emotional and cried a bunch (but when do I not) because the movie was deep and didn't have a lot of comedic relief to it. Like Collins' book, the film emphasizes how something can consume your life and infect all aspects of it. Without spoiling it, one of the characters struggles with being unable to enjoy their hobby/job due to their illness and another character fights her bulimia while being pregnant. Obviously, all of the characters, some more than others, are fighting for their lives. I think this show is definitely starting a conversation about the different types of disordered eating and how they can affect everyone around the victim. I know that many people believe that Netflix's 13 Reasons Why romanticizes mental illness and were afraid that this film would do the same. Regardless of how I feel about 13RW, To the Bone doesn't romanticize Ellen's life. In fact, I'd be hard pressed to find a single person that's envious of her, her family, or her friend's lives.

To end on a positive note, I want to talk about one more story in Unfiltered. Lily Collins' entire career is one that I find completely admirable. She knew what she wanted to do and she made it happen. From her start at Elle Girl UK to working with Nickelodeon. Those opportunities are ones that she created herself, they weren't handed to her. She demonstrates the importance of hard work, creativity, and individuality and it's almost shocking how self-aware she has been from a young age. We all have quite a few lessons to learn from Lily Collins and I cannot wait to see what she does next!